"The door is an integral part of architecture and it is deeply embedded in our psychology (security, home, access, etc) it is the demarcation between inside and outside, public and private, unfamiliar and familiar. Arrival Reception aims to investigate the subtle processes of the event of transition by extending and emphasizing this liminal space. The question then is not "what is behind the door" but "what is in the door". Using different elements in the installation, Arrival Reception would suggest narratives set in the context of a dwelling (private home) in Singapore public housing unit. Viewers of the installation would encounter "transition" in a physical sense as they slowly embody the role of a guest to that of a host." Mike HJ Chang // Artist Statement

I had the pleasure of collaborating with Mike as a sound designer / composer for his work at Gillman Barracks, Singapore, which featured in  'Engaging Perspectives: New Art from Singapore' exhibition from January 26th - March 31st 2013.

Mike gave me an open-ended brief of 're-interpreting the sound of knocking' for a 5.1 surround sound set-up within his installation. As stimuli Mike provided images of drawings that would be in the constructed space, some of his writing about the work, as well as sketches and plans describing the function and flow of the space. 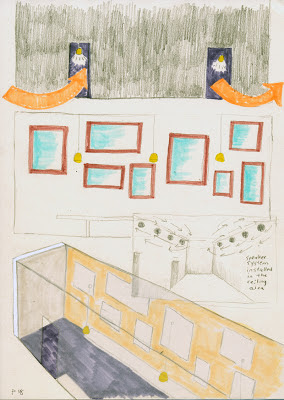 Given the short time frame for this work I had to decide on my source material and direction for the composition fairly fast. Having just acquired a 'broken' upright piano (thank you T.H.E crew!) I began thinking whether or not, after a little 'fixing', it would be a suitable sounding body to generate a variety interesting and relevant material to work with.


Well, only one way to find out! 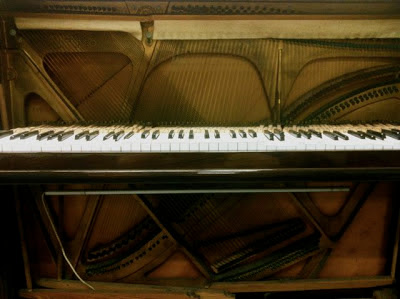 The 'fix' was simple (with a little help from Billy & Yang Jie); dismantle the front of the piano and remove the non-functional action, to expose its glourious innards! Having direct access to the strings, both for playing and micing, would allow me to capture the resonance of the body and strings in greater detail proceeding an impact - knocking, for instance. 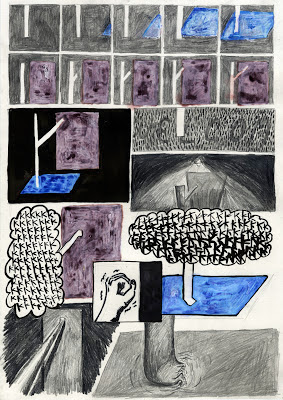 'What resonates through the body' could play off Mike's idea of 'what is in the door', I thought.

After a few session improvising with the piano (using various implements) I got down to recording setting up a mic at the base of the piano. 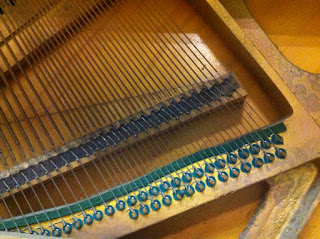 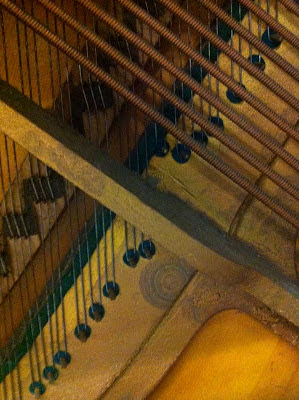 From here I reviewed my material, editing and categorising that which had potential. The categorisation fell into three broad categories; single knocks, harmonics, gestures, followed by a short descriptors for each file - e.g. knuckle-hard, strum-gold, chopsticks-acceldash, etc - 'You've got to have a system'!

So, with all my material prepared and my speakers set up for 5.1 (surround) I began ideation around the theme and images provided, with these three  compositional mantras in mind; 1) keep it simple; layering, overlapping and looping of material to create more dynamic gestures / subtle ambiances, 2) apply a minimal approach; makes use of intervals of quietness / silence, 3) play with spatial dynamics; movement, placement and depth (using reverb) within the 5.1 set up. 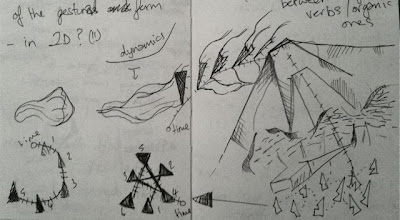 I approached the composition in quite an instinctive and linear manner, in the sense that I allowed each knocking moment / gesture suggest what sort of knock might come next; in other words, within the framework I set myself I let the material guide me. You may hear within the composition itself sometimes I subvert expectation too: If you listen to the excerpt below on headphones you can get an impression of this, however this aspect of the piece is more apparent within the installation itself because of the spatial dynamics afforded by the 5.1 set up.


Mike and I decided on the 5.1 set up (below) early on, so I could proceed to experiment with different variations of sound activity and spatial movement as I was composing. I tested an early draft of the piece within the installation space itself, once the system had been put in place correctly. After listening and making notes, I returned to the studio for the final few session of refining the piece in time for the opening. 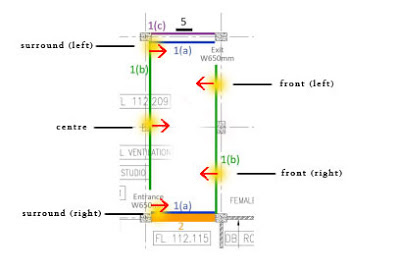 Just a quick note; technical information on how to make a surround DVD using compressor and DVDSP can be found here.

Speaking of 5.1, it was a real pleasure to compose within it again! The last time I worked with surround sound was for my installation Sonorous City (2009). There's a lot of room for ideation when working with sound in 3-dimensional space, due to the fact that it's particularly effective at enveloping the listener within an aural experience that is closer to how we hear in the real world (as in Sonorous City).

For Arrival Reception, 5.1 served its purpose in a more figurative way; a means to reflect and transform the act of knocking across the physical space within the installation, in parallel to Mike 'extending and emphasizing' the liminal space of the door. 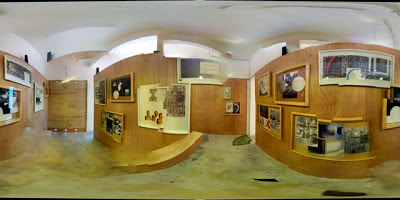 From a psychological point of view I find the perceptual mutation of space fascinating - seemingly, it is always vulnerable to the individuals subjective projections. Perhaps the lucid transformation and reconfiguration of space within dreams can indicate just how much of our subconscious imbues space with our individual fragments of memory and associated emotions.

Amidst the writing of this piece, a scenario conjured itself within my mind... I imagine lovers, standing either side of an open door, passionately arguing with searing, salacious tongues. Each progressive utterance digs deep into the flesh of the other and leaves a bloody tear where it exits. The lovers have ripped themselves apart from one another with the weight of their words, just as weight of their words brought them together. Whilst each remains visible to the other through the open door, the perceptual disparity between them suggests that the door has not only been closed, but bolted shut. In this lucid moment where the illusory cloud of desire begins to dissolve, they know exactly where each other stands even if they're unable to see eye to eye.