Two years ago I spent several months listening and recording in Bukit Brown cemetery, then a peaceful resting place for early Chinese settlers in Singapore, and a rich environment for a multitude of resident and migratory birds.

Whilst exploring Bukit Brown's 200 hectare woodland, I was exposed to a dazzling array of birds. Every trip provided new encounters with species I had never before heard, from bulbuls, barbets and bee-eaters, to racket-tailed drongos, kites and tailor birds. It was a wonderfully vivid and visceral exposure to the beauty and diversity of Singapore's avian life. A reminder that there are habitats that feel a world away from the roar of the urban soundscape, and the manicured experience of nature found within the city. 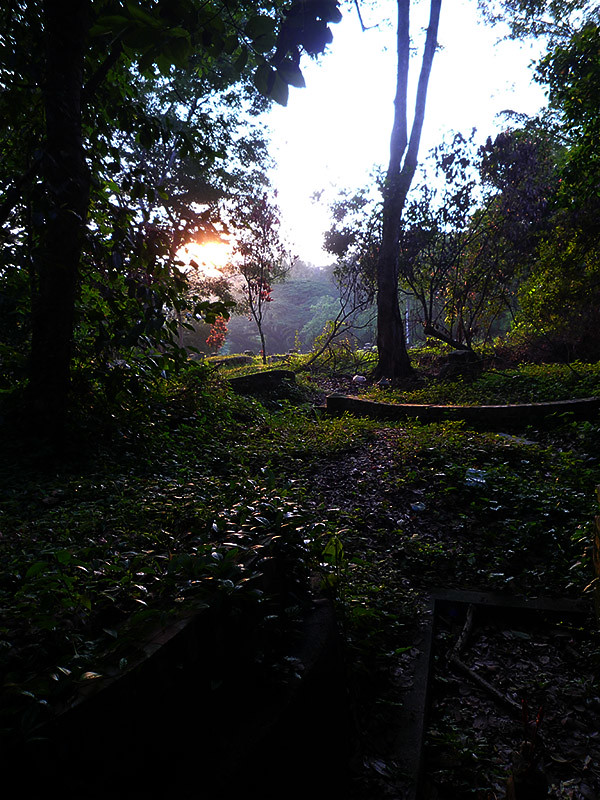 Field recording can be a very intimate and immersive means of connecting with a place. The four months I spent at Bukit Brown was perhaps the first time I'd recorded extensively in a single location. As time progressed, I became drawn deeper into a curious sensation of dissolving into the place; by listening intently to Bukit Brown's soundscape, to the tiny details of insects and nuanced gestures of birds, I experienced a letting go of self, whereby the perceived boundary between me and the environment began to blur within my consciousness. This accumulated affinity with Bukit Brown brought me back to the feeling of being tethered to the natural world. Temporarily removed from the momentum of metropolis, my pace slowed and a sense of tranquility began to dwell within me each time I visited. 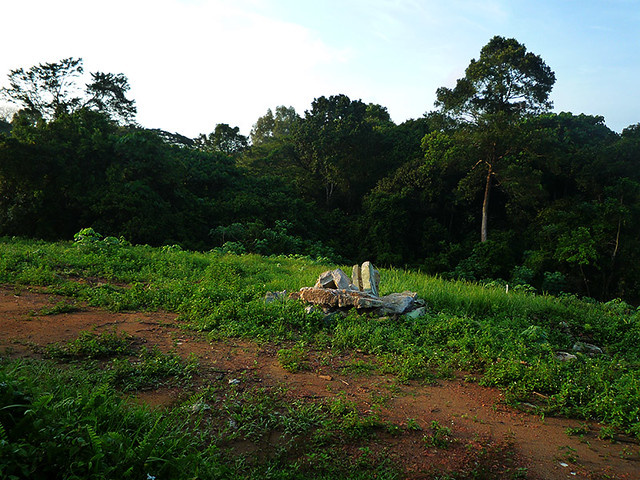 
I went on to develop a sketch for a third piece Untitled (Bukit Brown Cemetery III), which took the form of a drawing performance accompanied by a dubplate pressed with excerpts from my 24 hour soundscape portrait (at top of this post).

As the dubplate played I created a visual score using ground charcoal, my hands and a stanley knife. The idea for this work germinated whilst imagining the potential affects on the soundscape that would result from the future plans for the place. 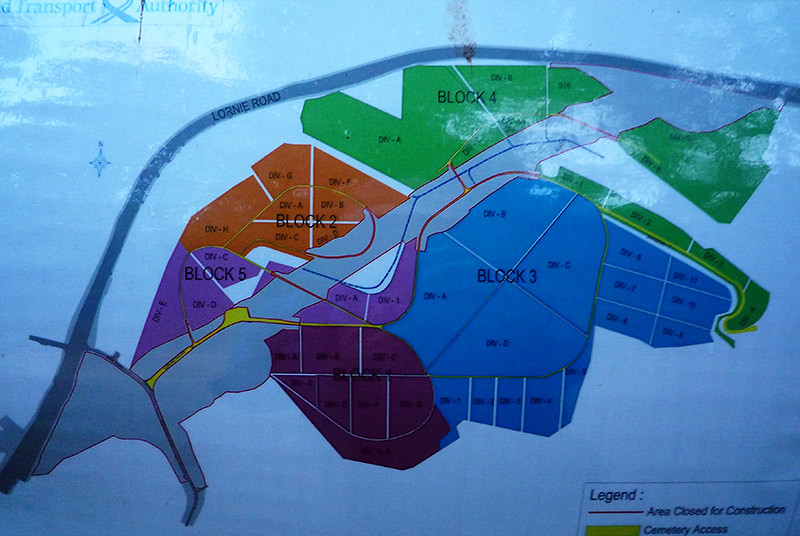 In early 2013, it was announced that an 8-lane highway was going to be constructed through the cemetery. Despite the best efforts of those who opposed the loss of natural habitat and local history, Bukit Brown's trajectory unfortunately could not be changed. In December that year the mass grave exhumation commenced, trees were felled and land plots were hoarded up and flattened by heavy machinery. 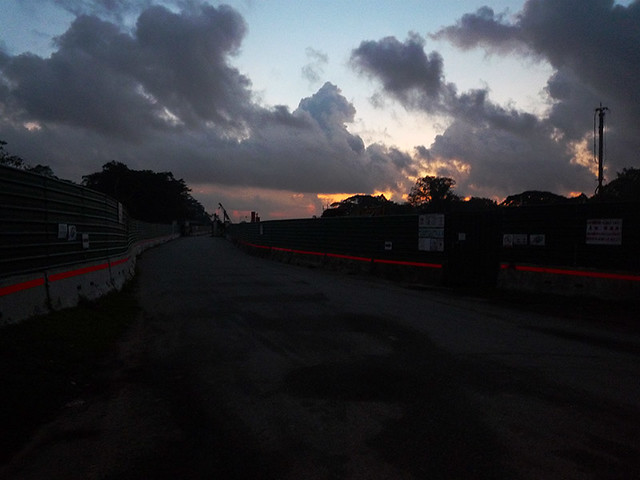 Fast-forward two years and I find myself back at Bukit Brown once again. The feeling of the place has changed dramatically. Now, to enter the cemetery via Lorong Halwa, you have to journey a few hundred meters through a green gauntlet of metal hoarding and concrete barriers. It's an inescapable reminder of the drastic transformation on the horizon. 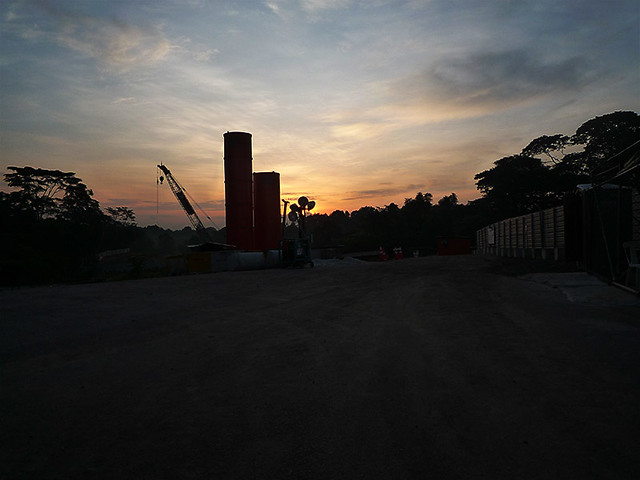 During these initial trips to the cemetery earlier this year (most of which were in the afternoon), I noted that the soundscape was quite subdued in comparison to 2013. I thought this could be attributed both to habit loss as well as the presence of continuous construction sounds. 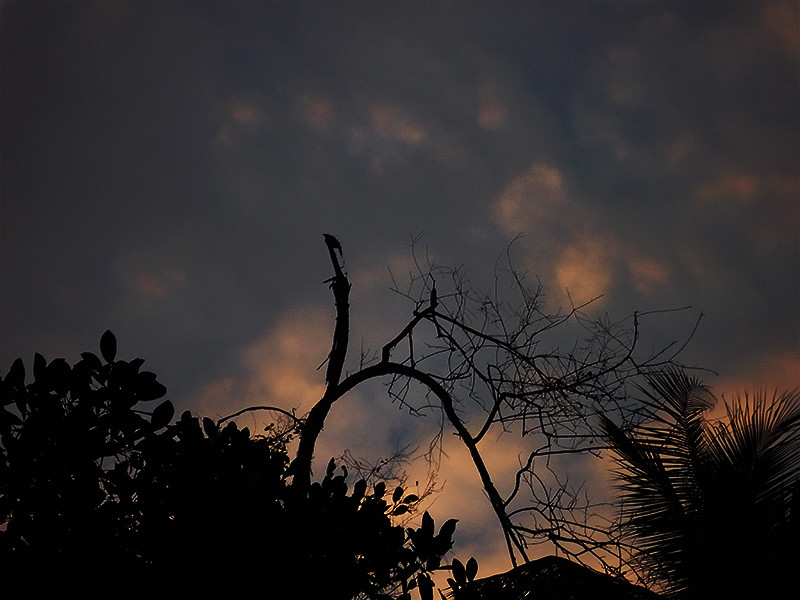 However, recently upon reaching the cemetery early one morning, the soundscape appeared to be bustling with barbets, kingfishers, bulbuls, pink-necked green pigeons, and a few other species. So, I wondered whether these particular birds had not yet been overly affected by the sound of construction present during the day. After all, they would have some respite between the evenings and early mornings, when the construction workers are off site.

Naturally other factors could be contributing too; for instance, some areas of the woodland might afford these birds better acoustic insulation from the presence of construction sound due to tree density or topography acting as a means of sound absorption or dispersion.


Earlier in the year I came across the work of Bernie Krause, in particular a comparative soundscape study he conducted at Lincoln Meadow in 1989/1990, which measured how selective logging impacted the presence of birds during the dawn chorus (skip to 4:17 in the video above). What Krause contends is that although the process of selective logging caused minimal visible change to the environment, the affect on the soundscape were conversely very noticeable, as his field recordings and spectrograms clearly demonstrate. Krause goes on to explain how the biophony of Lincoln Meadow – that is the collective sounds of non-human organisms within that environment – has been affected beyond the period of his initial study:

"I've returned to Lincoln Meadow 15 times in the last 25 years and I can tell you that the density and diversity of that biophony has not yet returned to anything like it was before the operation." [1]

I also read up on Boise State University researcher's Phantom Road project, the first experimental study of its kind to measure the effect of road noise on the population of migratory birds within an untouched woodland habitat, not dissimilar from Bukit Brown:

'Our phantom road—an array of speakers broadcasting road noise into a roadless landscape—allowed us to isolate the effects of noise. The decline of bird abundance by over one-quarter along the phantom road, and the almost complete avoidance of two species by our treatments, suggests that road noise is a major driver of the documented effects of roads on wildlife. Therefore, our results experimentally validate the observational conclusions of past researchers—that negative effects of roads on animals can be driven by traffic noise.' [2] 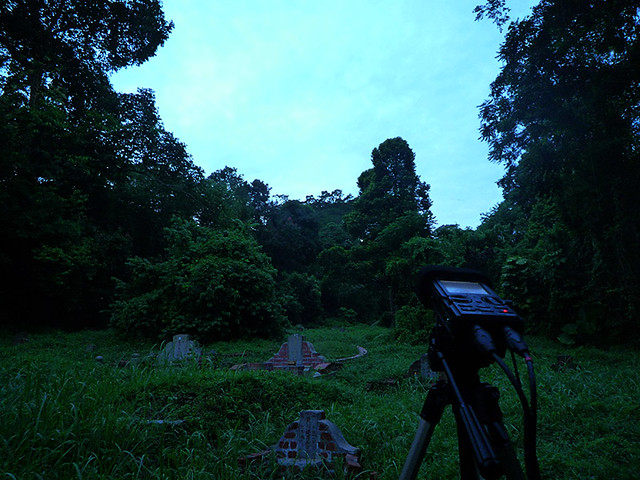 Inspired by the aforementioned studies I have planned to record the dawn chorus at different locations within the cemetery over the coming weeks, with the intention of repeating this process at the same locations after the highway has been completed in 2017. 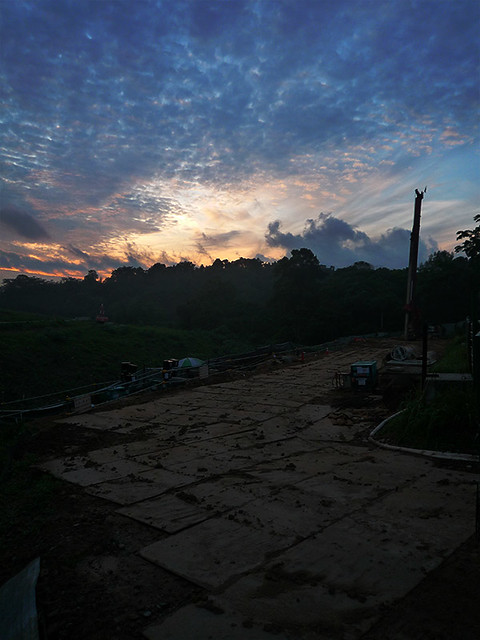 Although I'm treating this more as an artistic study rather than a scientific one, these comparative recordings should give a good impression of the extent to which the highway has affected the wildlife populations of Bukit Brown. In the likely scenario where the birds disappear, there will at least be a record of their presence.

Some hope lies in the fact that there is a growing field of research into how anthropogenic (man-made) sound affects other living things. As such there is potential that this body of knowledge will eventually become integrated into environmental impact assessments, that is, evaluative procedures that measure the likely affects that proposed developments on the environment. In countries like Singapore, perhaps the logical first step would be to make EIA's mandatory and independent; currently they are not. [3]

[1] Bernie Krause The Voice of the Natural World: https://www.youtube.com/watch?v=uTbA-mxo858
[2] Christopher J. W. McClure, Heidi E. Ware, Jay Carlisle, Gregory Kaltenecker, Jesse R. Barber
An experimental investigation into the effects of traffic noise on distributions of birds: avoiding the phantom road: http://rspb.royalsocietypublishing.org/content/280/1773/20132290
[3] Patrick A. Hesp The Environmental Impact Assessment process in Singapore with particular respect to coastal environments and the role of NGOs: www.researchgate.net/publication/225688548
Posted by ZTHQ at 04:00 No comments: