The last month has been an intense but inspiring one. I've been finding my feet again, in terms of my solo practise, thanks to the awesome people at CAKE Theatrical Productions, who invited me to propose a piece for their event Running With Strippers:

'... three nights of alternative artistic encounters brought to you by artists across disciplines bent on designing original work with a spirit of experimentation and exposing varying degrees of nakedness, metaphorical or otherwise.'

I decided to return my focus to Bukit Brown and challenge myself to find a different ways of listening to and imagining the sounds that I experienced there.

I revisited a previous performance piece, Untitled (Bukit Brown Cemetery III), where I created a live visual score with charcoal to the sound of my field recordings played back on a dubplate record. This piece dwelled on the potential effects the highway would have upon the cemetery's soundscape, influenced by the Phantom Road study I mentioned in my previous post. 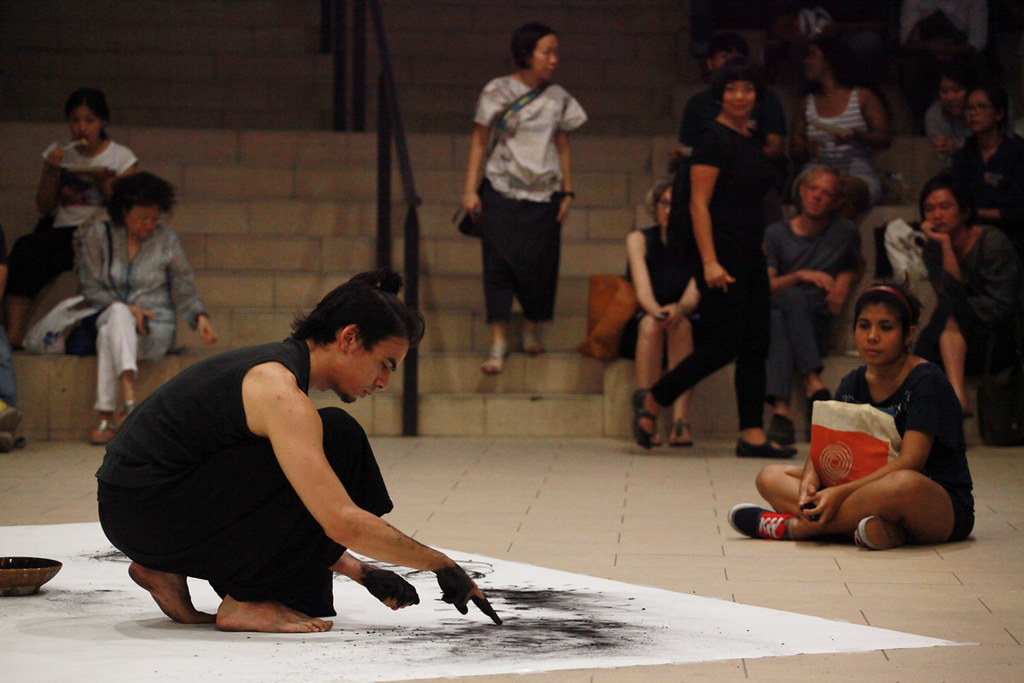 I used this as a starting point for Untitled II only this time I flipped the approach on it's head; I aimed to created a live soundscape to a fixed visual score which I would compile as a 30 minute film.

For another project I've been working this year, the Railtrack Songmaps Project, I have been creating a lot of spectrograms of bird songs. A spectrogram is a visual representation of a sounds frequency spectrum over time. 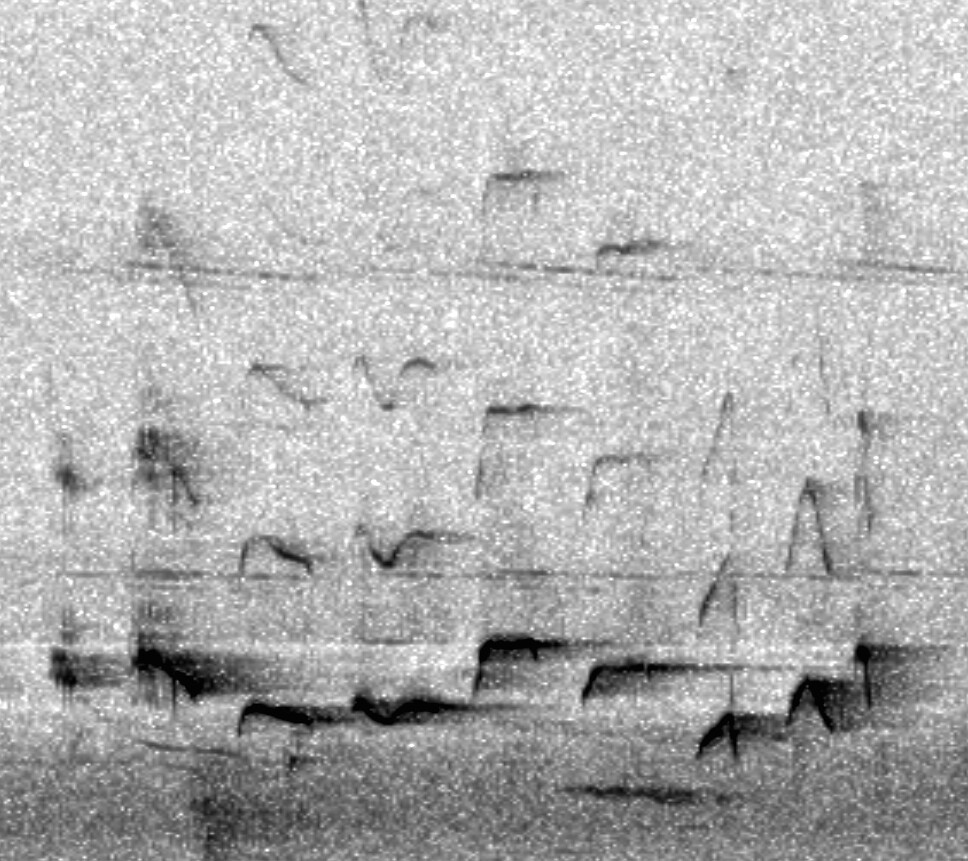 With a bit of careful tweaking they can reveal quite beautiful textures and gestures present within a sound recording.

Spectrograms offered me another way to see sounds – something I've been exploring within my practise for a while – making the different articulations and nuances of, for example, a birds song visible in a way that eluded my hand-drawn responses to their sonorous expressions.

I kept this in mind as I began work on Untitled II.

To start with I set myself a few goals for this project. Having purchased Ableton Live Suite some time ago (but not quite delving into it yet), I wanted to use this project as a chance to explore how I could work with it in a live / performance context. On top of that, I also took the opportunity to acquire and learn Ableton's PUSH controller.

So, I began sinking my teeth into working with samples in Ableton + PUSH, thanks to a bit of help from some online tutorials. I will save the more techie / geeky details for another post, however I will say this, the flexibility and ease at which you can build depth and complexity from simple sounds is fantastic!

Similarly, the use of macros for mapping parameters (and thereby gaining greater gestural control over a sound) is deliciously simple and effective. I found my workflow within Ableton, in terms of ideation, was much more fluid (and enjoyable) than working with a linear sequencer, such as Logic, which I've been using for a long, long time! Refreshing.

I spent some time going through my Bukit Brown library from 2013 (& some dawn chorus recordings from earlier this year) and then selecting sounds to work with and create instrument racks from. 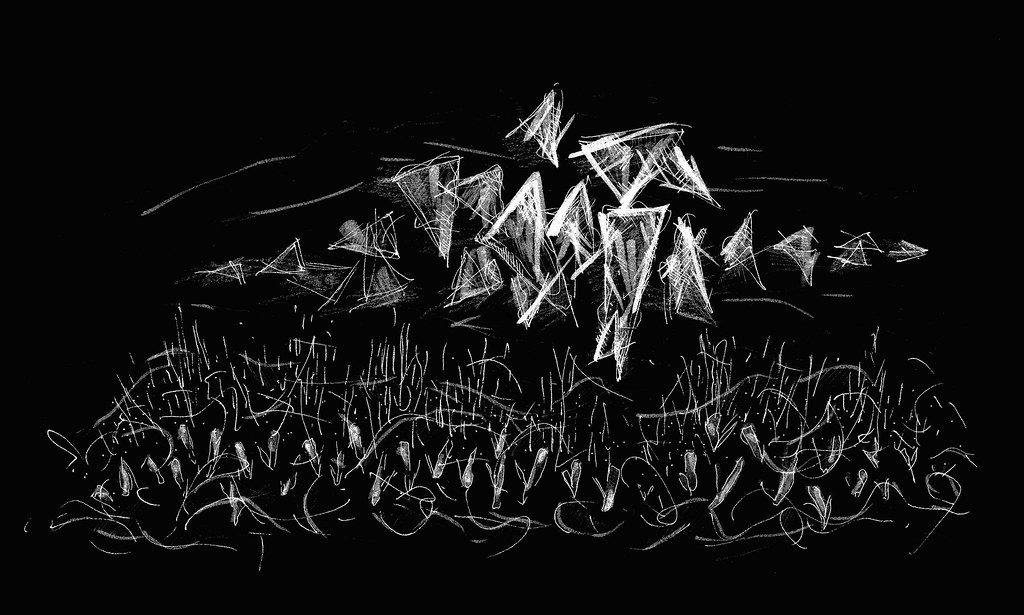 In tandem, I spent some time drawing in response to my recordings again. However, I felt like I was just articulating the forms in the same way I had done previously, and this made the images feel predictable and somewhat lifeless to me.

The original idea in my proposal was to create a series of hand-drawn visual scores and digitally 'stitch' them together to form one side-scrolling score, which I would then respond to live with sound. But since these hand-rendered attempts felt like a bit of a dead end, I started to bring spectrograms into the equation. I simply started to improvise with the instruments I had created using my Bukit Brown sounds and then see how the audio would translate as a spectrograms. 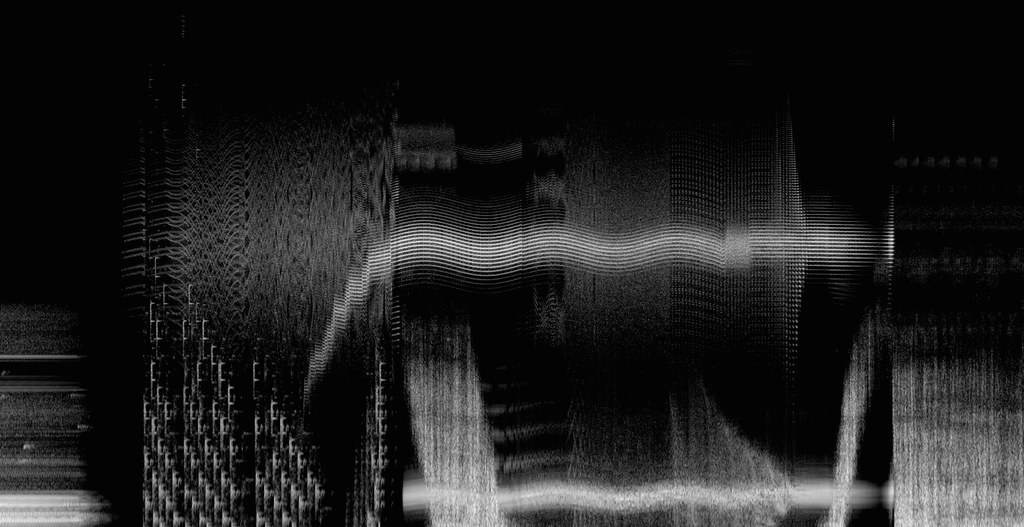 In my earlier works about Bukit Brown, I chose conflicting approaches to using my sound recordings of Bukit Brown, to bring out the ethical implications of how we think about nature and its worth.

For example, in Respect (Bukit Brown Cemetery I) I took a very light-handed compositional approach, leaving them 'as they were', natural and unprocessed, and thereby adopting the stance that we should be leaving habitats like Bukit Brown alone.

In contrast, the sounds within Exploit (Bukit Brown Cemetery II) were processed heavily, contorted and distorted beyond recognition, and done so purely for the purpose of 'making progress' with a new work.

In utilising the opposite approaches to material, I hoped the two pieces would create tension against one another and open up a more dynamic space within the narrative of Singapore's perpetual development for the audience to situate themselves within.

Dubplate & Drawing from Respect (left) and Still from Exploit (right) (2013)

However, in Untitled II, I tried to find a middle ground in my thinking. I didn't want to 'exploit' my recordings, but neither did I want to leave them completely in their original form: With the soundscape of Bukit Brown transforming as every month goes by, I wanted to find an alternative way to respond to the idea of a soundscape in flux, evolving into a different kind of beast amidst the arrival of dominant anthropogenic (man-made) sounds.

I started to see my efforts as giving these sounds a place to express something about their situation, albeit through me as a conduit.

As I continued to improvise with my created instruments and understood the spectrogram software in greater depth, I soon realized something; I could create my whole visual score by drawing with the sounds of Bukit Brown, allowing them to 'make their mark' directly, so to speak.

I began exploring how different sonic gestures would translate into spectrograms and gradually I built up a library of exported spectrogram sequences. In turn, I began to experimenting with different ways of animating them (simply) in Adobe Premiere, after stitching the sequences together in Photoshop. 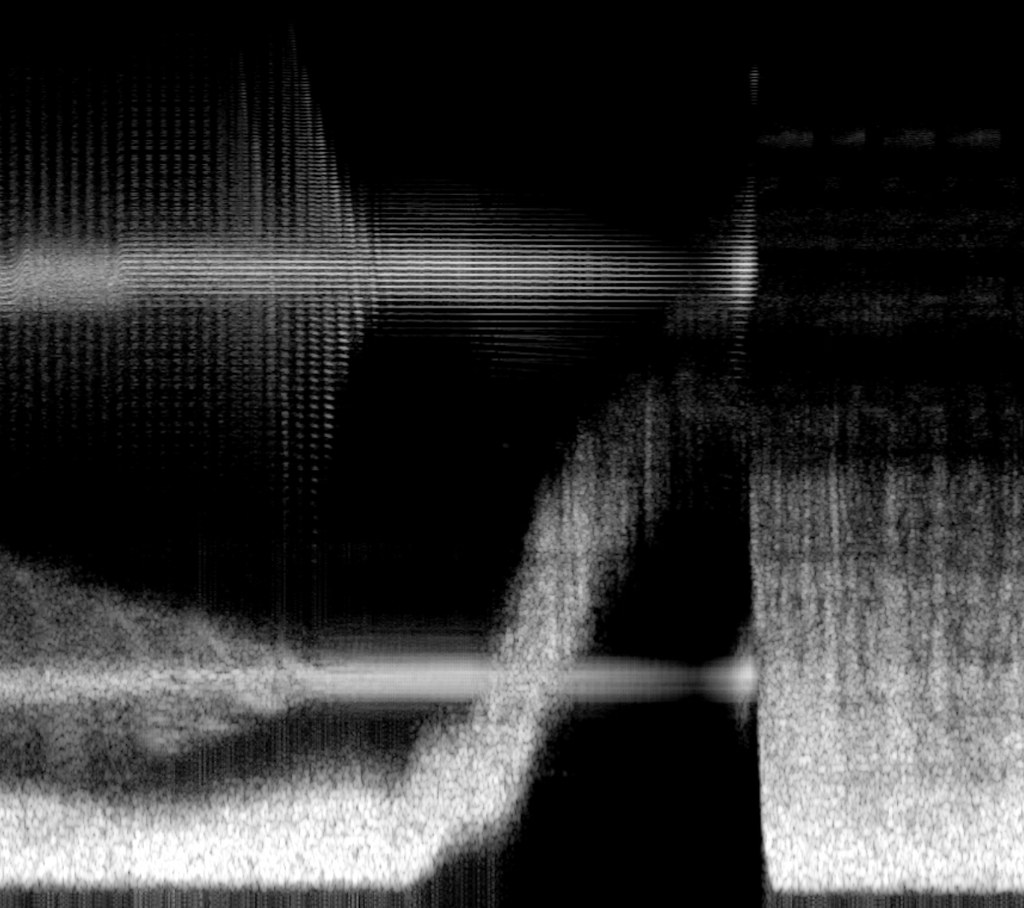 It was a very software heavy process, but it reminded me of how much I enjoy using and combining these creative tools / mediums. Each one creates different spaces for ideas, and things get exciting when ideas collide between them.

For the sake of balance, I feel it's important not to get too carried away by the spectacle of endless possibilities in the digital realm – so for this work I tried to keep things relatively simple. Hopefully this will help to give more space for the audience to read and interpret the visual score as they listen, as opposed to being overwhelmed by sensory abundance!

Time was moving fast and I needed to think more about structure, so I began to arrange my material in line with my first Untitled performance, covering a 24 hour cycle of the soundscape of Bukit Brown. 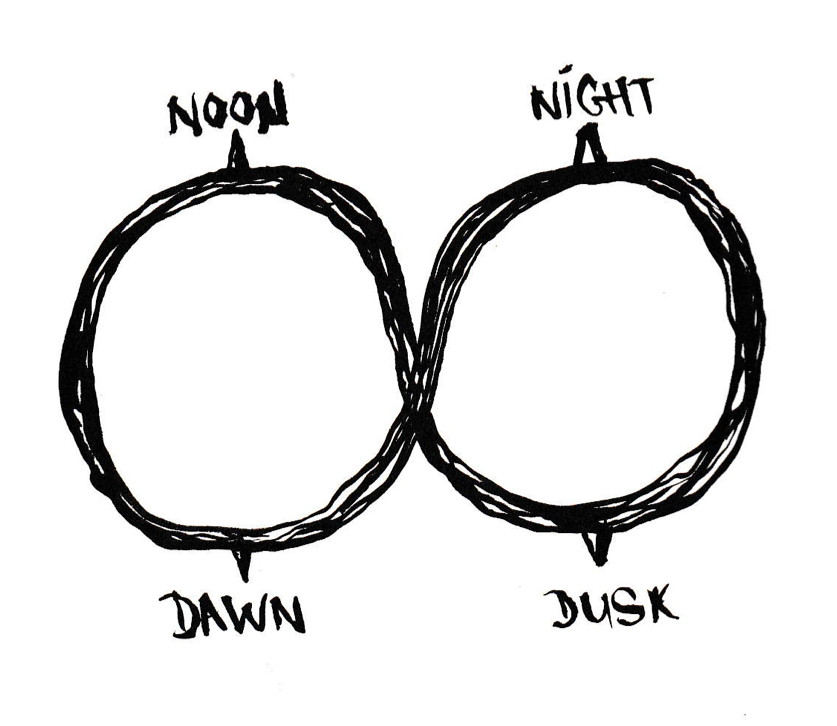 I thought it would be interesting to bring the audience through a condensed experience of the cemetery's soundscape, experiencing a more complete and intimate portrait of the place over 30 mins.

One thing I wanted to bring into this piece, in terms of affect, was to create the ambience of the psychological states I experienced whilst recording in the cemetery alone at night / early morning. I was partly drawn to recording in the darkness by my desire to embrace the unknown – that which is not visible / knowable – and confronting my own fears that surround death and mortality.

The atmosphere of the cemetery during those early trips felt unlike any place I’ve ever experienced. As if an invisible cloud had engulfed its grounds and enveloped me inside its tangibly thick body. Though the rational part of my mind rejected the idea that ghosts, spirits and the afterlife exist, I was still compelled to pass through the cemetery with an internal mantra exclaiming that ‘I am passing through respectfully and mean no harm’ and ‘I am here with peace in my heart and good intentions’. Who was I trying to convince? I started to question myself, believing that IF anything was there, it would be able to see through any untruths I harboured. 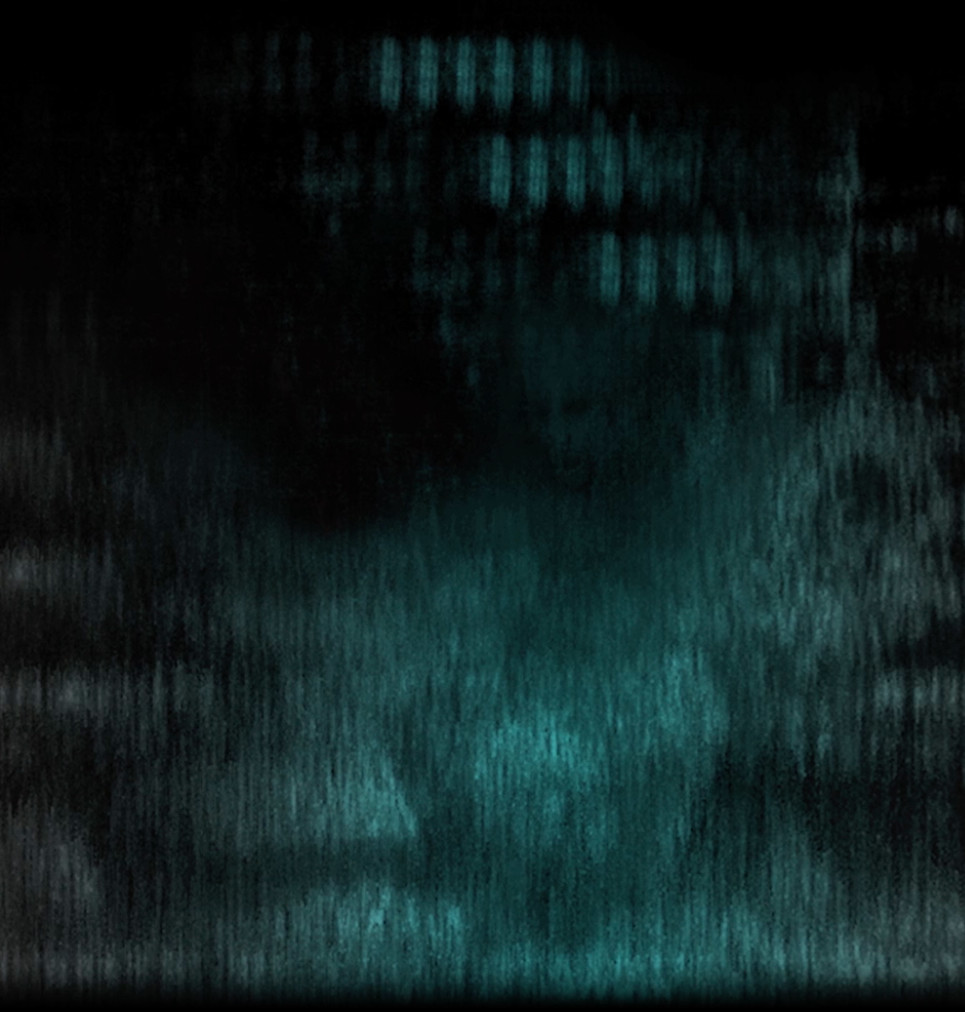 It was as if the essence of my deepest moral self was reflected back and judged from the darkness. My mantras had come to fore as a kind of self-preservation as I walked further into the unknown.

In parts of the cemetery shadows dominated the moonlight to the extent that one’s imagination could project all sorts of things lingering in the dark grey, mist-laden textures of the landscape. I started to entertain the possibility that there may well exist things beyond what I could fathom to be real in this place. With my psyche drifting halfway between consciousness and dreams, my minds eye conjured ambiguous figures and sounds at the periphery of my senses. I felt something from these imagined spirits, that they knew this place was soon to change. I felt sadness, coupled with a deeper sense of purpose.

Though I was aware my psyche was most likely projecting these internal images and thoughts outwards, the feelings of vulnerability and exposure I felt were very real.

Bukit Brown became my mirror, for that brief period of time.

I'm really excited about sharing the work this Friday. It's been an exciting journey creating it and I'm curious to find out how people will respond to it. I'm incredibly grateful to Natalie and Sharon for this opportunity to develop this work – thank you! It has given me a lot and I hope that the work will give something back to the audience! More details about the event can be found here: